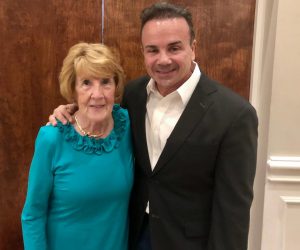 Mary Ann Doonan of Stratford was unanimously elected as its Grand Marshal for the parade to be held on Tuesday, March 17, 2020 through Downtown Bridgeport.  Doonan, who is retired from People’s United Bank operations department, is longtime volunteer leader in the Irish community.

“Each of the 18 nominations that we received for Mary Ann Doonan would make you cry,” stated Peter Carroll, 2019 Grand Marshal who was in charge of the selection committee.  “Mary Ann is so deserving and yet when I called her to tell her she was selected, she said there are others more deserving… fortunately, her husband told her to ‘say yes’,” Carroll added.

Born Mary Ann O’Connell in County Kerry, Ireland, Mary Ann was the oldest of 14 children.  At 16 years old, she left Kerry to pursue her dreams in the United States.  She arrived in 1956 and found a home at the Gaelic American Club.  She volunteered there for decades and was elected the first woman president in the Club’s history in 1997 and 1998.  She wasn’t the last, paving the way for other women.

Soon after the Parade Committee was formed, Mary Ann joined in and held many roles over the years including establishing the Miss Shamrock Scholarship program and serving as Treasurer and in 2011 Chairperson.  She has volunteered for many other groups including the Mercy Learning Center, Merton Center, Under the Bridge program and Ancient Order of Hibernians.   In her spare time, she knits prayer shawls along with her group from St. James Church for the patients at St. Vincent’s Medical Center.

Doonan will be introduced at various events including the Half Way to St. Patrick’s Day Party at the Gaelic American Club on September 15, 2019.   As a Grand Marshal, Doonan will receive her official silk sash and green blazer at the Grand Marshal’s Ball in January.

It takes about $75,000 annually to pay for the parade and fund its scholarship program according to the Parade Chairperson, John Brannelly.

“Mary Ann Doonan will help us with various fundraising programs that take place throughout the year to raise funds including a golf tournament on October 1 at Mill River Country Club in Stratford,” Brannelly added.

Mary Ann has been married Peter Doonan for 55 years and together they raised their daughter and three sons in Stratford, instilling her Irish heritage in each of them.  Now, 80 years old and a grandmother, she still volunteers for many groups and still inspires others to get involved, which is an important trait for a Grand Marshal.