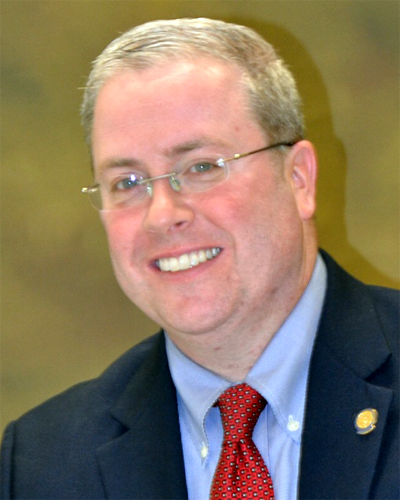 Tom McCarthy was elected the Bridgeport City Council President in December 2007 after serving for six years as a City Councilman representing the 133rd District. Tom is a full-time labor and employment attorney having received his Juris Doctorate from Case Western Reserve University School of Law in Cleveland, OH. He graduated with a degree in Political Science from Fairfield University.

As the Bridgeport City Council President, Tom has led the City Council during a time of great development. The long dormant SteelPointe project is now being built, featuring the Bass Pro Shops as the anchor tenant. The result of this is Bridgeport is now a destination point for businesses and developers. Tom has spearheaded efforts to reduce the city budget and stabilize city taxes while bringing a higher level of transparency and accountability to the city budgeting process. As co-chair of the Council Ordinance Committee, Tom managed the process that created the first Small and Minority Business Contracting Ordinance in Bridgeport. This has opened up new work opportunities for local and minority businesses in Bridgeport.

For his work on the Council, Tom was recognized in 2008 by the national newspaper, The Irish Echo, as a ‘Top 40 Under 40’ in the United States. The Bridgeport Regional Business Council awarded Tom their Regional Elected Official Impact Award in 2009. The Central Connecticut Coastal YMCA honored Tom with its Public Servant Award in 2010. In 2012, Tom was presented with the Bridgeport Elks Distinguished Citizen Award and the Disability Resource Center of Fairfield County Community Partner Award. In 2013, Tom was named “40 under 40” by the Fairfield County Business Journal. In 2015, Tom was named to the Notre Dame High School Alumni Hall of Fame. Tom was recently named the 2017 Grand Marshal of the Greater Bridgeport St. Patrick’s Parade.

In 2014, Tom was elected to the National League of Cities Board of Directors in his role as City Council President. In addition to his work on the City Council, Tom serves as a Board Member of the United Way of Coastal Fairfield County, the Barnum Museum and the Barnum Festival Foundation. Tom also serves as a member of the Bridgeport Airport Commission. The American Council of Young Political Leaders chose Tom to be a lifetime member and sent him as a delegation member on a goodwill trip with the U.S. State Department to Japan.