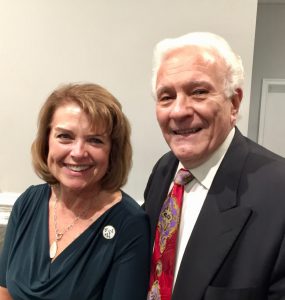 The original parade was small by comparison to later efforts; but nonetheless a proud display of Irish spirit, led by our first Grand Marshal, Martin Reidy, a respected member of the Irish-American community of Greater Bridgeport and a charter member of the Gaelic-American Club and the Ancient Order of Hibernians of Bridgeport.

Cathy continued on as General Chairperson through the 1984 & 1985 parades before relinquishing her position to Joseph McNamara, another Bridgeport native, who led the 1986 & 1987 parade committees, and developed fund-raising activities. During this period, the committee’s familiar “Shamrock in Connecticut” logo was born.

Patrick Daly, who led the committee as Chairperson in 1988 & 1989, promoted corporate sponsorship, and established a day-long celebration of events, beginning with a Mass in honor of St. Patrick at the Cathedral of St. Augustine (constructed by the Irish in 1864) followed by the First Grand Marshal’s Breakfast (1988) at J.F. O’Connell’s Pub. Pat also oversaw the creation of the first Miss Shamrock Scholarship Contest, the first parade-morning Irish step-dancing exhibition at Crossroads Mall, as well as the committee’s commemorative button fundraiser.

Parade Chairman John Carolan, who led the committee’s activities during the 1990 & 1991 parades, expanded the size of the committee, the quantity of marching units in the parade and the parade route. During his tenure, the committee began adding floats to the parade, and held the first flag-raising ceremony at Baldwin Plaza. Fund-raisers took place at the Germania-Schwaben Hall and Captain’s Cove Marina. John also invited newly-installed Bishop Edward M. Egan, J.C.D. to celebrate the St. Patrick’s Day Mass at the Cathedral.

Dan Sullivan served as Chairperson in 1992 and not only further expanded the number of parade sponsors and marching units, but also oversaw the creation of the committee’s first cultural afternoon, held at Southport’s Pequot Library, and featuring traditional Irish music, step-dancing and readings by the Clan Na Gael Players. Dan’s wife, Lucille, provided enormous assistance to her husband during the months leading up to the committee’s Tenth Anniversary Celebration. During Dan’s year as Chairperson, the committee introduced its annual Post-Parade Luncheon at the Holiday Inn.

In 1993, the committee elected Margaret Dzunko and Denis O’Malley to lead as Chairperson and Vice-Chairperson, respectively. During their year at the helm, the committee added a reviewing stand and a panel of judges to select the parade’s best participants, as well as the addition of a Mr. Shamrock Scholarship. During that year, the committee assembled a float in tribute to the Gaelic-American Club’s new Cultural Center, which opened the following May.

During the 1994 & 1995 parade seasons, Marge Sheehan became the first Grand Marshal (together with her husband, Bob, in 1993) to serve as committee Chairperson. Under her leadership, the focus of the parade changed to more of a musical entertainment format as the quantity of marching bands and musical groups increased.

Mark Smith served as General Chairperson during the 1996 & 1997 parades and heavily promoted the committee’s fund-raising through its souvenir advertisement journal, during the committee’s Fifteenth Anniversary Celebration. Mark established the “Halfway to St. Patrick’s Day” kick-off to the parade season at the Gaelic American Club and encouraged “family-friendly” events.

John O’Malley served as Chairperson during the 1998, 1999, & 2001 parades seasons. During John’s tenure, the Gaelic-American Club hosted a Sunday Brunch fundraiser. The Black Rock Castle became the home to both the “Halfway to St. Patrick’s Day” and “Countdown to St. Patrick’s Day” events. Corporate fund-raising and the size of the parade expanded to new, record numbers.

In 2000, under Dave Howe’s leadership as Chairperson, the committee increased its social and fundraising activities, and refined the annual Grand Marshal’s Gala to a “Ball” concept, with formal attire, and corporate sponsorship (Guinness-Harp Corporation). Fund-raising socials took place at the Polka Dot Playhouse, Murphy’s Law and Tony’s Huntington Inn. The re-concepted cultural afternoon (now “Irish Heritage Day”) moved to the GAC, and featured a wide variety of Irish entertainers. The committee also developed a millennium lapel pin fund-raiser, featuring the committee’s logo centered with the year 2000.

Bob Curwen served as General Chairperson during three significant years of growth for the committee (2002-2004). During this period, the parade outgrew its path through the streets of Downtown Bridgeport, requiring a larger route, beginning and ending at the city’s Arena at Harbor Yard. In 2004, the parade welcomed the Uptown String Band (“The Mummers”) direct from Philadelphia, to entertain through the parade and luncheon. The number of major financial contributors to the parade also increased under Bob’s leadership.

The committee fund-raising events featuring major talents such as Andy Cooney, Deirdre O’Reilly and Dermot O’Brien, re-established its own float-building committee, and appointed the Rev. Edward J. Small, S.J., a Chaplain in the Ancient Order of Hibernians, to Parade Chaplain.

The 2005 parade committee, chaired by last year’s Vice-Chairman Richard Owens, established a new website, a Scholarship Golf Classic, re-stylized the “Shamrock in Connecticut” logo, reconfigured the parade route and arranged an encore performance by the Uptown String band.  Rich Owens chaired the Commitee again in 2006 and 2007.

Fred Cotter was the 2011 and 2012  Chairperson with Patty McDonnell serving as Vice Chair.

Mary Ann Doonan was Chairperson in 2013.

In 2017 Charlie Carroll was Co-Chair along with Alana Kabel.

In 2018 Connie Beagan was Chairperson.

In 2019 John Brannelly was named Chairperson, following in the footsteps of his sister Catherine C. Brannelly Austin who was the founding Chairperson in 1982 when she was 27 years old.