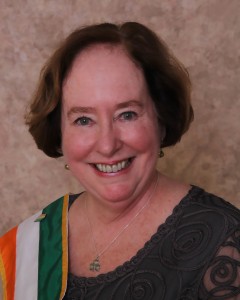 Remembers going to the Ladies AOH with her mother in the basement of St. Peter’s Church, going to watch Irish Hurling at Seaside Park, and to the AOH picnics at the Knight’s of Columbus in Fairfield

Marched in the very first Bridgeport parade with daughter Laura who was three years old at the time and with son Bill in a stroller!

In 1993, the Connecticut Post named Alanna a “Woman of Substance” for her work with the Ladies Ancient Order of Hibernians, Mae King Division, Bridgeport.

Alanna has been a member of the Greater Bridgeport St. Patrick’s Day Parade Committee since first being named President of the Ladies Hibernians and at the suggestion of Marge Sheehan, a former grand marshal. She worked on the Mr. and Miss Shamrock contest for eight years, helped with the Golf Tournament in 2013 and successfully co-chaired it with Tom McCarthy in 2014. She also helped with the Parade Journal in 2012.

Graduated from Lauralton Hall in 1974

Graduated from Immaculata University in 1978 with an A.B. in History and Political Science and a minor in Spanish
Received the Rev. Robert T. Riddle Medal for highest cumulative average in the Department at graduation and the Pan American Medal for contributions to the understanding of Latin American History

She married the love of her life, Will Kabel, 37 years ago. They are the proud parents of four children – Laura and her husband Ken Legum, Bill and the love of his life Kelsey Macri, Alex and his wife Un Gyung and Brian. They are the grandparents of three boys who they love to the moon and back – twins Benjamin and Jacob and Noah Legum.

All four of her children were Miss or Mr. Shamrock. All four attended St. Ann School in Bridgeport and Notre Dame High School of Fairfield. Alanna is a past Treasurer and President of the St. Ann’s Home School Association. In 2007, Notre Dame High School recognized her for her outstanding contributions to the school.

Served the City of Bridgeport for twenty years

Began working for the City in 1978 as a Relocation Assistant, advising residents and businesses of their federal relocation benefits when they were displaced by urban renewal activities

By 1990, had risen up through the ranks to the position of Acting Director of Housing, overseeing all of the City’s affordable housing programs and initiatives. It was during this time Alanna first worked with Bill Finch who was working at Neighborhood Housing Services in Bridgeport.

She returned to Bridgeport in 2006 as the Deputy Chief Administrative Officer for Housing & Community Development. Recruited by former Mayor Fabrizi. Directly responsible to realign staff and programs to produce community, economic and housing development results that demonstrated the City’s capacity to empower low and moderate income families by administering approximately$6.5 million of annual federal programs consistent with HUD regulations.

In 2008, Mayor Bill Finch promoted Alanna to Deputy Chief Administrative Officer for Central Grants & Community Development. Developed, implemented and managed a comprehensive grants policy and staff for the City combining all competitive and formula grants into streamlined services which resulted in grants awards of over $50,000,000 to Bridgeport in a two year period.

She represented the City (and served as Co-Chair for one year) on the federal New York-Connecticut Sustainable Communities Consortium which is implemented a $6 million federal HUD/EPA/DOT transit oriented development planning award throughout portions of New York and Connecticut. The grant laid the foundation for a second train station in Bridgeport.

Alanna served on the national board of the National Community Development Association, as co-chair of the national Membership Committee and as the Chair of Region I (New England). This is an organization of affordable housing and community development officials from all across America working together to promote federal programs that assist many low and moderate income households. She also served as President and Vice-President of the Connecticut Community Development Association, a similar statewide organization.

In August 2014, Alanna became the Community Planning & Development Director for the Hartford Field Office of the United States Department of Housing & Urban Development. In this capacity, she administers $xx million of federal funding annually appropriated to 22 municipalities and the State of Connecticut to create viable urban communities. She also oversees $xx of federal funding annually awarded to agencies in Connecticut to eradicate homelessness. Many of the programs she administers today are the ones she worked in and during her tenure with the City of Bridgeport.

From 1992-2006, Alanna worked for the Norwalk Redevelopment Agency and rose through the ranks to become former Mayor Alex Knopp’s Director of Marketing and Business Development. She assisted in attracting Diageo, which consolidated and relocated their North American headquarters facility to Norwalk. She received a United States Attorney’s Award in 2001 for an affordable housing program, Call SoNo Home, and she received official recognition from the Connecticut General Assembly in May, 2006 for her efforts in Norwalk. She served on the United Way of Norwalk & Wilton Board of Directors, serving as its Secretary for two years. She was Co-Chair of the City’s Affordable Housing Task Force as well.

In 2005, The Hour newspaper recognized Alanna as “Hour People,” for being someone who sees beyond her own life and gives of her time and talents to
make Norwalk a better place.

During 2011, Alanna worked at the Connecticut Housing Finance Authority where she was given a Leadership Award for her development, administration and management of the Federal Emergency Homeowner’s Loan Program. She successfully committed $53 million in emergency mortgage assistance to 968 Connecticut households on the brink of foreclosure.