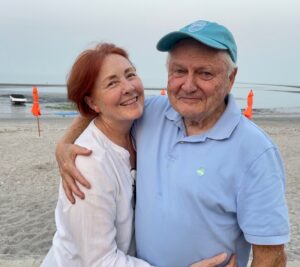 Although Gerry’s ancestral counties are County Clare (Reidys), County Limerick (Griffins), and County Antrim (McTamineys), he hails from Riverdale in the County Bronx. He holds dual Irish and American citizenship.

Gerry attended St. Gabriel’s Grammar, Manhattan Prep, and Manhattan College from which he graduated in 1964 with a BS Degree in Economics. He went on to the NYU School of Law graduating in 1967 with a Bachelor of Laws Degree (“LLB”). He later returned to NYU for post-graduate study and received a Masters of Law Degree in Corporation Law in 1970. (“LLM”). He is admitted to practice in the Courts of the State of New York and before the Federal Courts in the Second Circuit specializing in the areas of US and international joint ventures, antitrust and commercial litigation.

He met the love of his life and future bride Rose-Mary Mensching at a Halloween party in NYC in 1969. Rose-Mary is a graduate of the Bellevue Mills School of Nursing with an RN Degree. I guess Gerry was fortunate to have met her in her social capacity rather than in her professional capacity but I am sure she would have taken good care of him if the latter was the case. In any event, his bachelor days were soon over and they were married in December 1970. They have four wonderful children, Griffin (Mary), Sarah Reidy Ferguson (Jim), Brian, and Mike (Kathryn). Griffin and Mike and their families (which include Gerry’s five grandchildren) live in Fairfield within walking distance of their home. Brian lives in NYC and Sarah lives in Atlanta.

Gerry was also fortunate to have worked for two fine companies in his career which took Rose-Mary and him around the world. He joined Union Carbide as a young lawyer at their midtown Manhattan headquarters in 1968. In 1978, with Rose-Mary and three young children in tow, he was transferred to Houston Texas to work on a co-generation power project. Following the completion of the project in 1979, the family now increased to 6 by the birth of their son Mike in Houston, moved to Hong Kong where he took up the role of Area Attorney for Asia. In 1983 upon the completion of his assignment, he returned to the US to the recently relocated headquarters in Danbury, CT.

In 1997, Gerry left Union Carbide and joined Praxair Industrial Gas Company as Asst. General Counsel responsible for Asia and Rose-Mary and he moved to Singapore. This time they were on their own as Mike, their youngest, was already in college. Then with the Asian currency crisis in 1999, it was back to Danbury and in 2003 he and Rose-Mary relocated to Praxair Asia’s newly established headquarters in Shanghai, where he served as Vice President and General Counsel until his retirement from that position in 2007.

While living all those years in Asia, Gerry found that in addition to friends among the local people and business associates, the Irish ex-pat communities in Asia were always welcoming and he became a member of the Hong Kong American Club, the St. Patrick’s Society of Hong Kong, The Singapore American Club, the St. Patrick’s Society of Singapore and the Shanghai American Club. Not to neglect the US, he is a member of The Friendly Sons of St. Patrick in the City of New York, the Fairfield Gaelic American Club, The Wild Geese of Greenwich Ct., The Father John Conlisk Irish Scholarship Committee, The Fairfield Garden Club and The Fayerweather Yacht Club. He also marched in the St. Patrick’s Day Parades in New York City, Naples Florida, Savannah Georgia, Bridgeport Ct. and in the first and only St. Patrick’s Day Parade in Shanghai China. Speaking of Parades, he was a member of the US Army National Guard from 1960 to 1966.